Whitney is on the map again!

(Nearly two years ago (2013), we posted this tongue-in-cheek story about the creation of "Greater Nebraska Territory," the brain-child of the late Mike Cartwright, our friend who passed away last month (5/22/15) in Whitney.  Many folks well remember Mike, who was as a good friend and a great teacher, as a man who never forgot his roots.  And he did have a sense of humor, when he proclaimed Cora's Place in Whitney as the capital of Greater Nebraska Territory!) 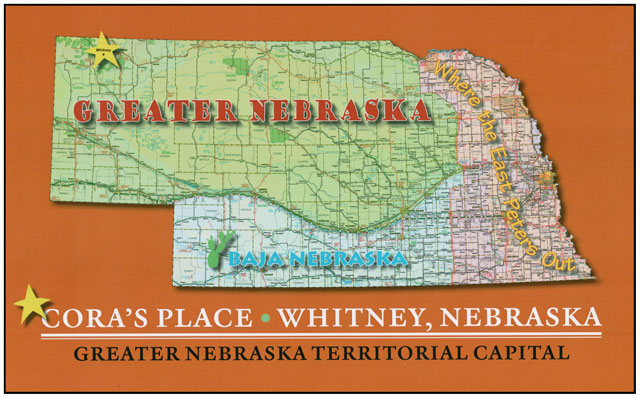 It's been almost four score and a decade since Whitney was a bustling community in the Nebraska panhandle -- a frontier town that boasted a bevy of businesses.  Simply put, its star was ascending and the future was bright in the early 20th century!

But following a disastrous fire in 1927, the wrath of the "Dirty 30's," and relocation of U.S. Highway 20 some years later, Whitney endured a sharp decline.   Nonetheless, even as recently as 25 years ago, in the wake of Mabel Kendrick's publishing of her book Still Alive and Well - Whitney, Nebraska, there were still vestiges of pride in this little village.  But still, the erosion has festered.

But the times are-a-changing!  One of the recent bright spots was the opening two years ago of Cora's Place, a quaint coffee shop on Missouri Street in the heart of Whitney.  Offering antiques, books, and coffee, perhaps its most important quality has been a spirit of "never say die!"  Whitney native Michael Cartwright, a long-time college professor and administrator, opened Cora's Place in August of 2011.  Its name is a tribute to his grandmother.

Maintaining residences in both Lincoln and Whitney, Mike and his wife, Jeanetta, have not only sustained Cora's Place, but we learned during a visit earlier this month that they now offer a tasty sandwich for those who may have a bit of an appetite.  But still, their real product is a cozy environment where locals and visitors can congregate at mid-day to enjoy some classic vinyl music, read a book or magazine, grab a bite, have some coffee, and most importantly -- bask in a bit of warm fellowship.

But now add a dash of tongue-in-cheek politics.  Conversations may divert to a rekindled notion of west Nebraska autonomy.  But wait a minute -- that notion has expanded to something that has a rather nice ring to it: Greater Nebraska Territory!  The map above shows the lay of the new political landscape, and Greater Nebraska seems to be accorded its proper position relative to both Baja Nebraska and the far eastern provinces Where the East Peters Out.  The map and related posters appear to have been the handiwork of Mike Cartwright and some of his confederates.

As fate would have it, Whitney has been declared the Territorial Capital of Greater Nebraska, and Cora's Place at 3305 Missouri Street seems to be the seat of the virtually non-existent government.

What's wrong with that?

We'll try to publish political postings as Greater Nebraska Territory evolves, including updates on the Territory's "No-Coast Coast Guard," which provides all necessary protection from heathen forces in the alien lands that surround our beloved territory.